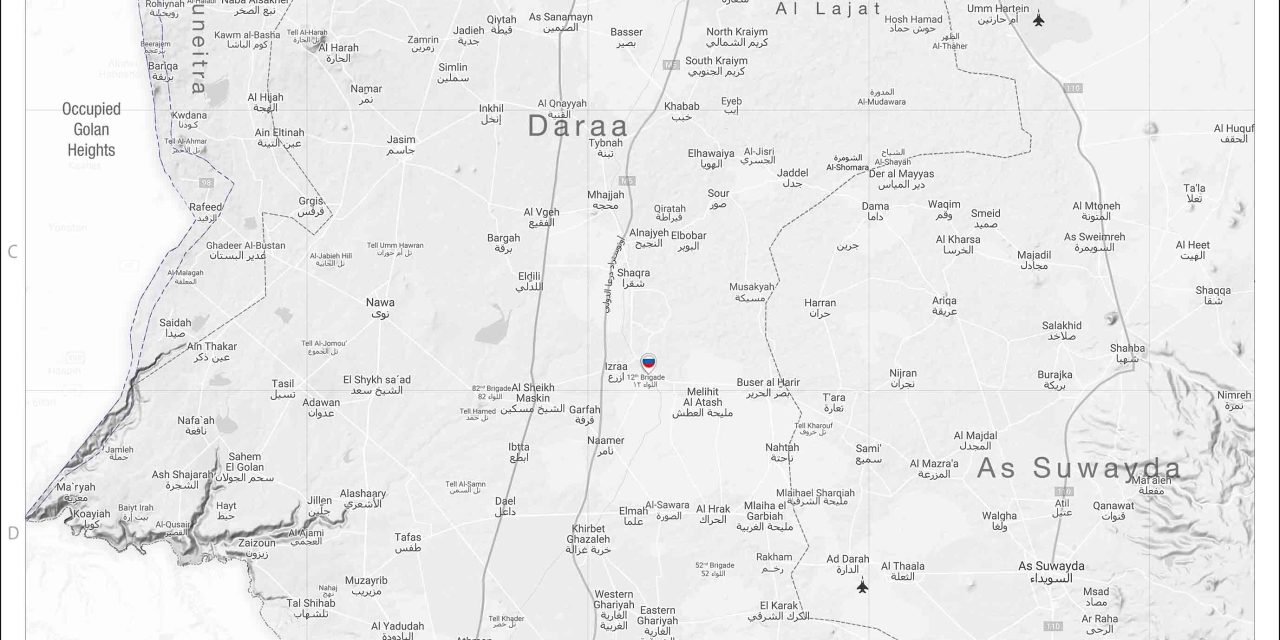 South Syria continues to face serious threats to its stability as it sinks deeper into a devastating economic crisis. The restive region saw an almost total shutdown during late 2022 as fuel became exceedingly scarce ahead of the region’s winter months as the Syrian pound dropped to historic lows. Although the situation has improved somewhat with the start of 2023, myriad security and economic challenges continue to threaten the livelihoods of residents.

Attached Map: Recent Developments in South Syria – 20th January 2023
(For a high-resolution version of this map, please use the form at the bottom of the page)

South Syria is reeling from unprecedented economic crisis that is making life untenable for a growing section of the population amid severe goods shortages and massive inflation rates. The regime slashed fuel allotments to the south in December, generating a fuel shortage that ultimately saw as much as 95% of public and private transit cease operations and more than 70% of schools close their doors as teachers and students alike were unable to even reach classrooms.

The fuel crisis is not unique to south Syria, but the area is home to some of Syria’s most vulnerable populations. The shortage caused a cascading series of failures for the south’s economy: business owners are unable to transport goods, residents are unable to leave their immediate area, workers and employees cannot work and the prices of all goods increased across the border due to higher shipping costs. At the crisis’ peak, as many as 50% of Daraa’s bakeries were unable to produce bread—a staple of the local diet—raising serious concerns about food security in the region.

By mid-January, the regime raised fuel allotments to Daraa, Quneitra and Suwayda provinces to approximately 75% of their pre-crisis levels. Although the increased availability of fuel has alleviated transportation issues and increased the availability of goods, serious challenges remain for local residents: the Syrian pound is at historically low value, remittances from Syrian expats abroad have dwindled and the economy is in a state of steady decay.

Unsurprisingly, then, the last several months have seen thousands of Syrians—mostly young men—flee Daraa province en route to Lebanon through illicit smuggling networks. In December alone, more than 140 men from Daraa province arrived on the shores of Italy after moving from Lebanon to Libya and onwards across the Mediterranean to the shores of Europe.

The journey is dangerous: those who wish to leave must pay extravagant sums to smugglers who bribe regime checkpoints between south Syria and Lebanon. For those seeking to travel to Europe, Libya is a popular destination where smugglers send migrants across the Mediterranean on overloaded and questionably seaworthy dinghies in exceedingly perilous conditions. The willingness of Syrians to undertake this journey underscores the bleak reality of life in south Syria: there are few options for them to support themselves and their families in an unstable region where life is defined by ongoing regime violations.

The worsening economic situation, coupled with a push by the regime to apprehend men wanted for military service or prior engagement with the former opposition, is likely to continue driving the exodus of young men from south Syria.

South Syria is home to a robust network of former opposition groups that often act as local police forces and buffers between local residents and the regime’s intelligence forces. The last several months have seen these groups increasingly tested by a host of new challenges stemming from radical groups and pressures from the regime’s intelligence and security forces.

Former opposition groups from western and eastern Daraa began a joint campaign against ISIS cells across Daraa province in October, launching sweeping raids against known radical armed groups. These operations included a mid-October raid against an ISIS hideout in Jasim in northern Daraa that ultimately eliminated Abu Hasan al-Qurayshi—the caliph of ISIS. Al-Qurayshi’s presence in the south raised serious questions: how could the leader of the world’s most notorious radical group thrive in an area under the ostensible control of the Syrian regime?

ISIS’ presence in the south is not a new phenomenon, and cells affiliated with the group have launched attacks against both the regime and former opposition for years. The regime has shown an unwillingness to engage this threat: even the mid-October raid that killed al-Qurayshi was conducted solely by former opposition fighters. It is this lack of any coherent or effective counterterrorism strategy that allowed ISIS to flourish in south Syria, culminating with a massive uptick in ISIS-led assassinations against prominent former opposition commanders throughout 2022.

Now, both western Daraa former opposition groups and eastern Daraa’s 8th Brigade, led by Ahmad al-Awdeh, continue to conduct their own counter-terror operations in areas under their influence. The months-long campaign has significantly limited ISIS’ operational capacity in the south, yet cells remain active in the area and continue to threaten local stability.

Ahmad al-Awdeh’s 8th Brigade remains the most influential and effective former opposition bloc in the south, and its forces are a key pillar of local stability in the Busra a-Sham area of eastern Daraa.

Nevertheless, the 8th Brigade faces myriad challenges stemming from the bleak economic situation and mounting pressure from the regime. Currently, the brigade is unable to pay consistent, livable salaries to its members—likely contributing to a wave of desertions and insubordinations that forced it to take disciplinary action against more than a dozen of its members.

The 8th Brigade continues to provide key support to local residents, yet there are serious concerns about its long-term future in light of tensions with the regime, threats from ISIS and an inability to pay livable wages. 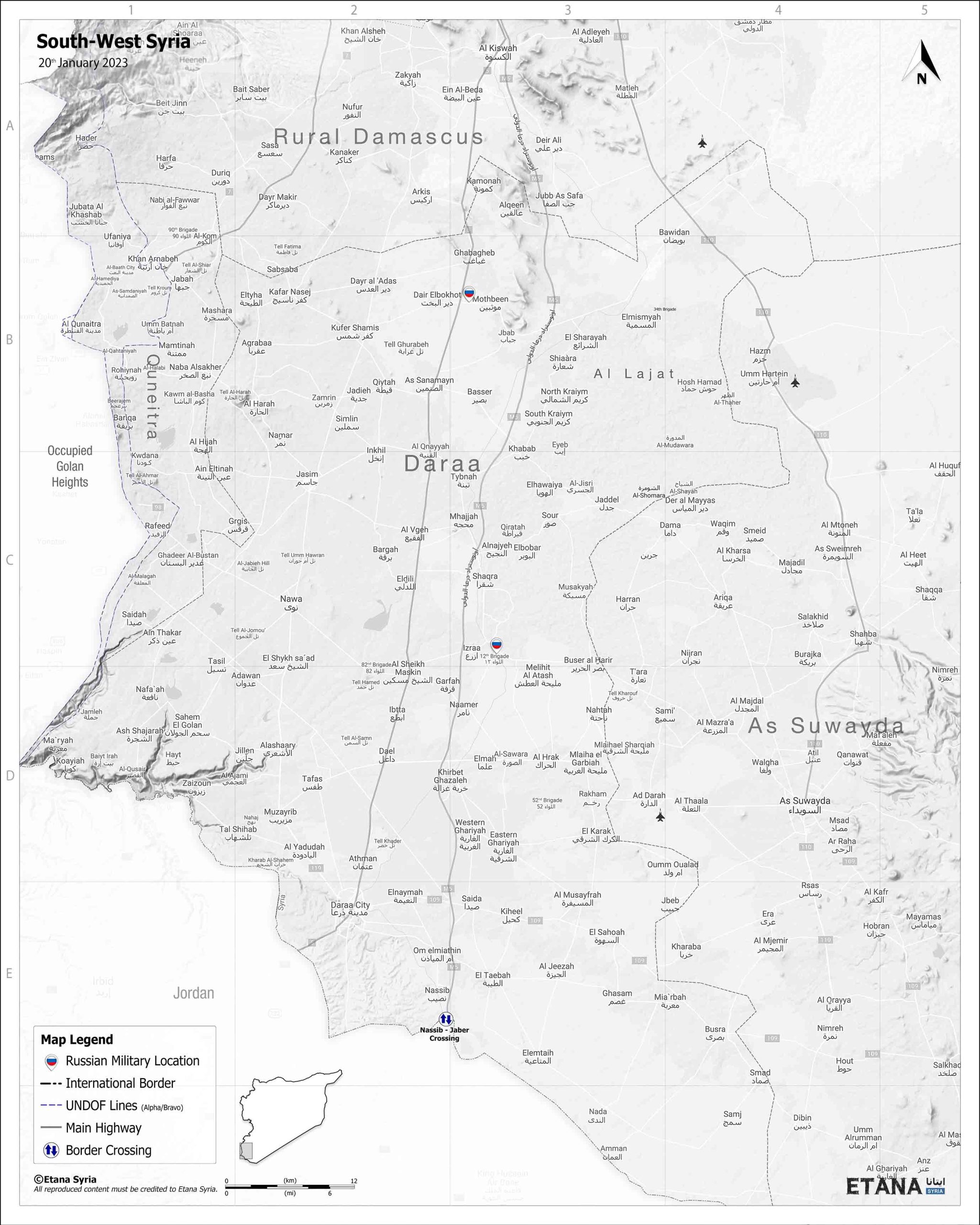